When I first spotted this recipe on Pinterest I knew I had to make it at some point soon.  It has 2 of my favorite things, eggplant and goat cheese, so I knew I would love it (and my husband is a fan too, so we were good to go).  I know some people aren't big fans of goat cheese, so I think subbing with feta or mozzarella would be great.  I actually combines feta and goat cheese one time, because I didn't have enough goat cheese, and it was delicious.  Also, using 2 eggplants for this yields A LOT of food.  I made it with 2 the first time, and had a ton of leftover food (and the sandwiches are delicious leftovers too...try them cold, amazing!), so the second time I made it with just one, and cut the recipe in half.  It was still a little much for 2 people.  I also made a small side of pasta to go with it, and it gave it more of an eggplant parmigiana feel.

Anyway, I don't really ever fry food, but I thought I would give it a try.  It wasn't so hard, and the crispness on the eggplant was amazing.  If you don't have a lot of time, you could easily use a pre-made sauce, instead of making this one yourself.  But, I do recommend you try this sauce at some point because it was delicious.  Instead of a sweet basil flavor which seems most common in sauce, you get a sweet kick of tarragon, which is lovely.  I have made this a few times now, and it's fairly quick to make (about 30 minutes).  It is a lot easier if you prep everything before and do it like an assembly line.  The eggplant cooks very quickly, about a minute per side, so keep your eye on it.

Also, if you REALLY needed to save time it might be okay to skip the last step of baking the sandwiches entirely.  I think with the warmth of the eggplant the cheese melts after a few minutes, and it doesn't probably need to be baked.  BUT, the eggplant you cooked in the first few batches, might be a little cold, so I guess that might be the benefit of baking.

This is just one eggplant, so this would make about 9 sandwiches (and I think 4 per person is more than enough)

My husband was in charge of the sauce!

Baked...see, it looks the same as the previous step...

Top with cheese and tarragon! Yum! 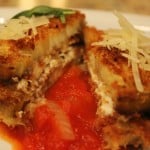