Pear Salad is a classic southern comfort food! These canned pears topped with mayonnaise, cheese, and a cherry will be a hit at the next potluck!

I know what you are thinking, pear salad?! Trust me, growing up in Michigan I'd never heard of pear salad. However, now that I live in Georgia, I hear about it ALL THE TIME.

It's kind of crazy in my honest opinion, but it's one of those things you just can't knock it 'til you've tried it. So, have you tried pear salad? Another southern classic we make all the time is Pimento Cheese, have you tried it?

Pear Salad is simple because it only has 3 ingredients, four if you want to get fancy.

How to make pear salad, the southern classic recipe:

**scroll down for full ingredients list and printable directions**

What is Pear Salad?

This is a fruit salad with pears, mayonnaise, and cheese. Some people like to serve it with a cherry on top or over a bed of lettuce. Its origins aren't completely known, but we do know it started in the south.

I have heard from many southerners that they grew up with it served in their school cafeteria, and many stories about people's grannies bringing it to events, or serving it every Sunday.

Every story I hear about pear salad has comforting thoughts of childhood and growing up around family!

Not only is this easy to make and super delicious, but it's also cheap! It's about $1 for a can of pears, probably .50 cents worth of mayo for the whole can of pears, and maybe .75 worth of cheese! Can't get much cheaper for a quick and easy side dish!

I highly suggest you take this pear salad to your next potluck or get together. Even if you don't live in the south, this will be a HUGE conversation starter and it will be interesting who actually tries it! Make sure you tell them, 'don't knock it until you try it!'

When to serve pear salad: 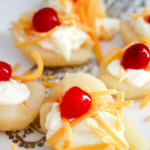 Pear Salad is a classic southern comfort food! Don't knock it until you try it; with only four ingredients so you can whip it up in no time!