Buffalo Quinoa Mac and Cheese is loaded with cheddar cheese and buffalo sauce! Topped with bleu cheese, this dish is perfection!

The last month or so we have been on a healthy food kick at our house.  We haven't really been indulging in the usual pasta, pizza, and cheese laden dishes.  I have been pretty good at making really healthy recipes for dinner, but when I saw a recipe for Buffalo Quinoa Mac and Cheese I almost had a heart attack.  How could I have never thought of this before??  I love quinoa.  I love buffalo anything.  I love cheese.  Hmmm.....DING DING DING, we found ourselves a winner!  The original recipe from Iowa Girl Eats called for chicken, so it can easily be added for all the meat eaters out there.  BUT, let me say that I really don't even think this dish needs any meat.  It is so hearty from the quinoa, and the buffalo sauce and blue cheese are so satisfying.

The Buffalo Quinoa Mac and Cheese really turned out amazing, and by the quinoa in place of the 'mac' in this recipe it really doesn't make it too unhealthy.  There is a lot of cheese involved, but even with that the meal comes in at under 500 calories, which really isn't bad for dinner.  You could also do smaller portions, and serve it as a side dish along with dinner.  Just be prepared, because it's nearly impossible to resist a second helping!

Use this Homemade Buffalo Sauce Recipe for the perfect flavor!

Like Buffalo Sauce recipes as much as I do?! See these other delicious ideas from Domestic Superhero: 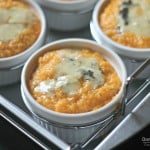