My husband celebrated his 29th birthday back in July, and I decided I wanted to buy him a new TV.  Since we had moved in April, our old TV (32 inches) was a little small for our new living room.  After much research I decided on a bigger, 51 inch TV, and was psyched to get it and throw it up on the wall.  Our new house already came pre-wired for the flat screen to mounted above the fireplace, and I planned on taking full advantage of it.  Well, after a huge ordeal with the TV and mounting process (long story short, ended up going through 3 tvs and a huge PITA to finally getting a TV that worked), we finally had it up on the wall.  Five minutes later, I decided I did not like it up there. It was much too high, and there wasn't enough space to actually mount it high enough, so the TV just looked like it was sitting on the mantle, which was not okay with me.  I will show you what I mean, but I am embarrassed to even post this picture.

And yes, that is my toddler watching Adele live at the Grammy's, because he will only watch TV if there are music videos playing....

So yeah, as you can see, it's really low, but it wasn't possible to put it any higher because of the pre-wiring already on the wall...ugh.  But this gave me another good excuse to take it down.  My husband actually liked it up there, but once I explained to him how we couldn't keep it up there, and how I would make an awesome console table, he agreed to take it down!

Since I have been on a DIY kick lately (see refinished dresser and farmhouse hutch!), I started searching craigslist and thrift stores, looking for the perfect dresser or table to turn into a console table.  After a couple weeks of not finding anything, I was getting really annoyed because 1.) I really wanted to take the tv down, and 2.) I wanted our living room to keep progressing in the right direction.  Then, on a whim I decided to stop into this thrift store we were passing one Saturday, and found the PERFECT dresser.  Sure, it was missing some hardware, and one of the drawers was completely broken and jammed inside, but I had a vision.  We picked it up the next day and I got to work!

Let me tell you, this bad boy was full with disgusting crap inside....and when I say crap, I mean literally crap.  Mouse crap.  It was everywhere.  And dust, baby powder (?!?!), safety pins, stray keys, bobby pins, and more dust were literally everywhere.  I wish I would have taken a picture to share, but I was too busy strapping a mask to my face and vacuuming it out.  Just getting the inside clean took me over an hour and a half....and it seemed like more dust would appear right when I thought I was done cleaning.  Anyway, after I cleaned it, I used my new power sander (!!) and stripped off the top layer so it wasn't shiny anymore.  I also took out the top row of drawers, because I wouldn't be needing those.  I decided to use that as the area for the cable box/dvd player/etc.

Next, I primed the entire dresser and filled the holes with wood filler.  I wasn't sure if I was going to use the same hardware or not, so I didn't want to risk having to fill the holes later.   I let that dry, and then sanded it smooth and even.

Onto painting.  If you know me, then you know that I am the most indecisive person when it comes to DIY projects.  I always have something in mind, but I get so anxious I am going to pick the wrong color or hardware or whatever it is.  For this console table, I REALLY wanted to paint it yellow.  But yellow?  Really?  I was sure, but unsure.  After much discussion, a few of my friends and husband reassured me that yellow could be great.  I looked up some examples of different yellow furniture on Pinterest, and found some inspiration.  I decided on a color called Jackson Square from Valspar, which is more of a dark yellow then a bright sunshine yellow.  I picked up a quart of the paint (and had my handy $10 off coupon from Lowes!), and headed home to get going.

I was a little unsure of the color at first, but it started growing on me, and darkened with additional coats.  I also had a plan to glaze the furniture to bring out the accent lines and make it not so plain. So after 2-3 coats of paint I was on to the glazing part.  I have never glazed anything before, but read several tutorials and guides to glazing furniture.  There is a great tutorial from Brooke, at All Things Thrifty, and took her advice and things seemed to go well.

After I was done with the glazing, I wanted to put some solid wood on the shelf that would be the top shelf for the cable boxes etc.  I measured the inside, and purchased a flat board from Home Depot, and had them cut it into 3 parts, so I could put it in easily.  This was a very simple step, and it definitely makes the TV Console look more polished.  I painted the boards, and also the inside of the top shelf that would be exposed.  For some reason in the pictures it's not really obvious that it is painted (shadows, I think), but it is.  I think it would be very noticeable and irritating if it weren't painted.

Next I waxed the entire piece in Minwax soft wax paste.  I just love this stuff. It is so easy to apply, it takes 20 minutes to dry, and then you buff it off (easily) and it has a really nice sheen, and is protected.

After I did this, I decided to keep the original hardware, but I gave it a spray of iron rubbed bronze spray paint...man, I love this stuff!  Talk about an instant upgrade!

I attached all the hardware, put the drawers back in, and we brought it inside!! I was so excited!!

I know this post is picture heavy, but who doesn't love a good before and after?!

Dresser: $50 (marked down from $79 because of my sweet negotiation skills)

Other things you might need to create this project:

Like I said before, I wasn't really sure of the yellow color once I started painting, but I really like how it turned out with the black glaze.  The color is really hard to capture in the picture, and probably the first couple pictures are the truest to the yellow it looks like in person.

I need something to fill the cubby in the middle....what would you put there?  I recently threw out a huge stack of magazines, so I can't increase the stack that is in there now.  Books? A picture? A basket?  What would you do? (Update: I made a basket!)

Like furniture DIYs as much as I do? Check out my other projects: 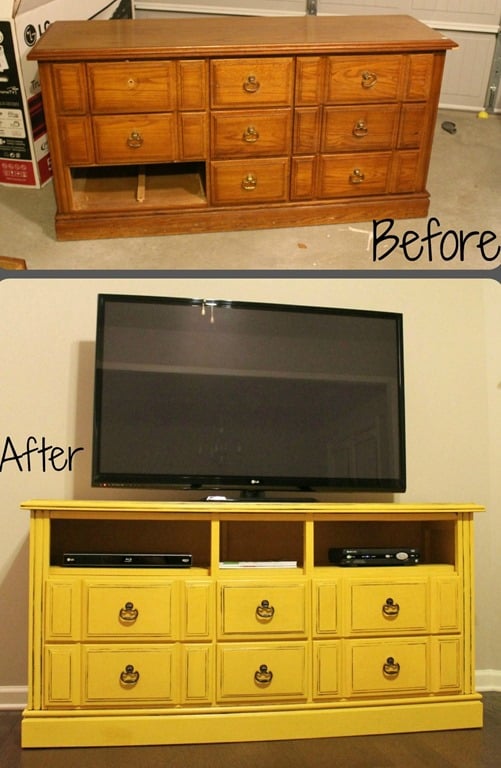 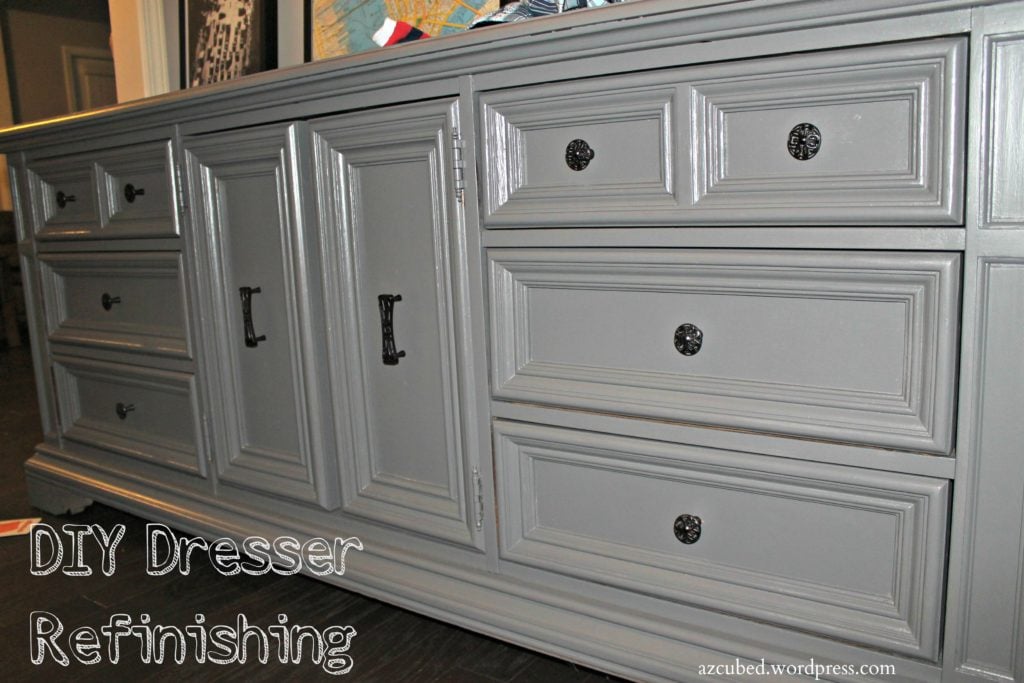 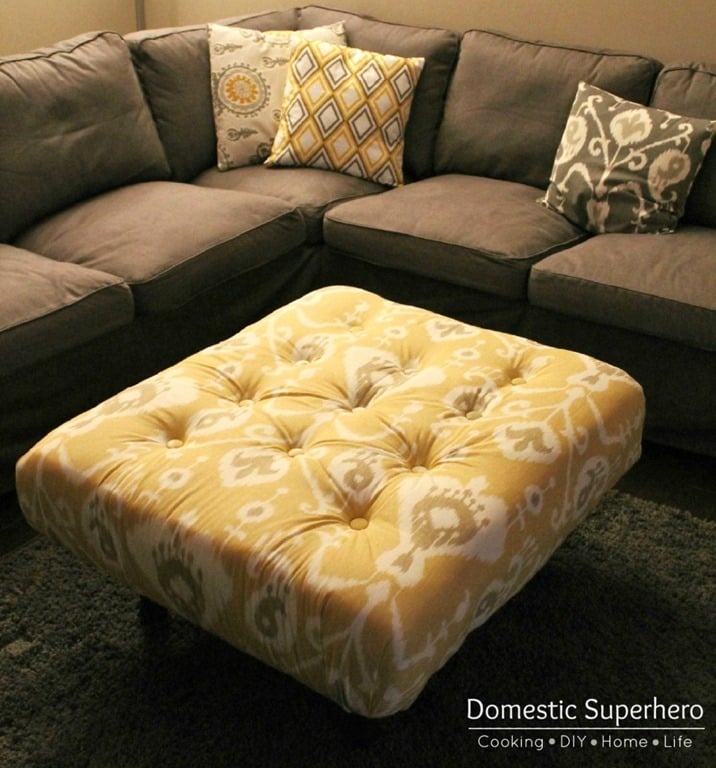 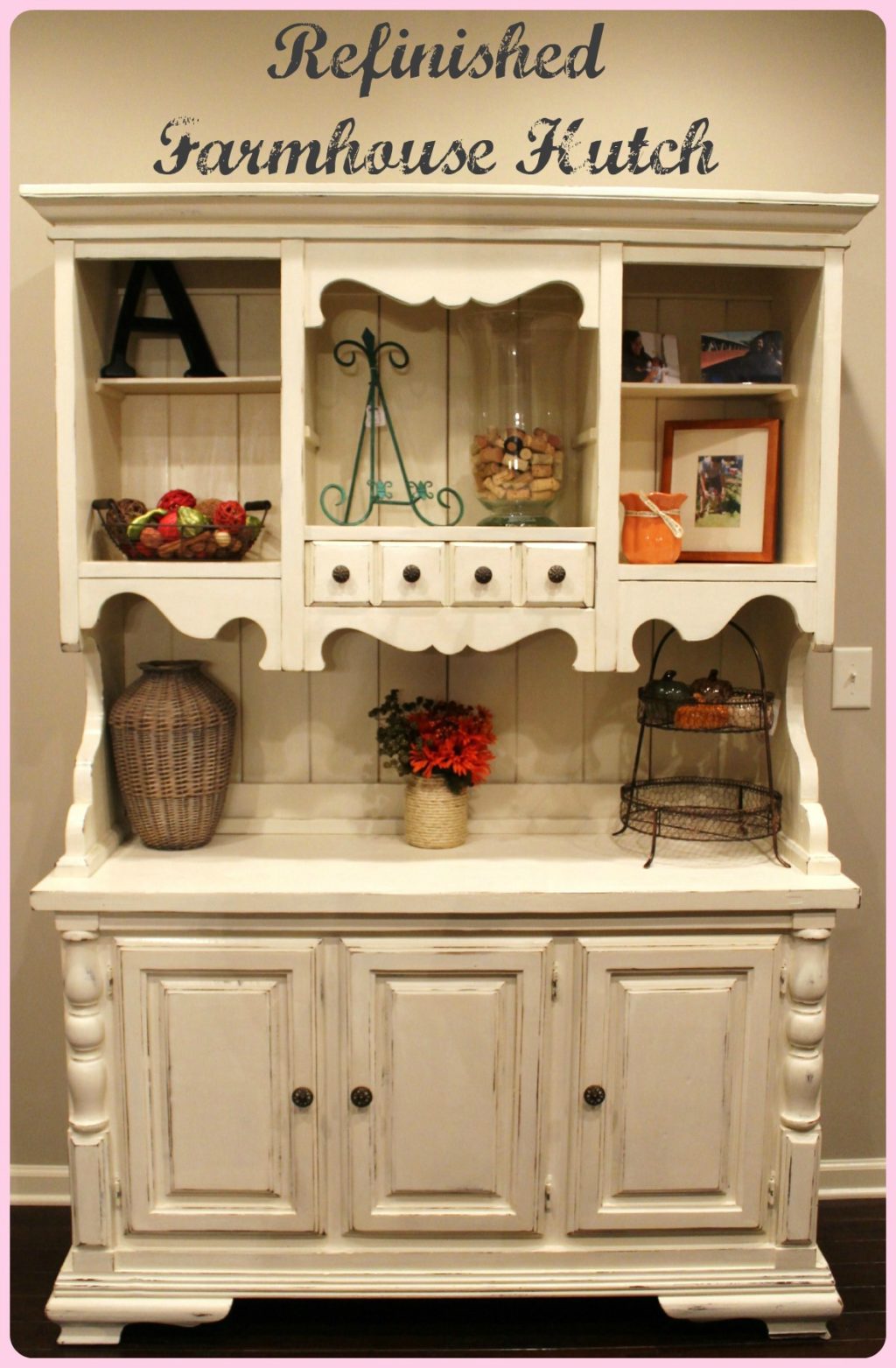