People that know me, know that I LOVE Mexican food.  I have never met an enchilada I didn't like, and am always trying to come up with different combinations.  I think my love for Mexican food grew when I was in college.  My freshman/sophomore years I worked during the summer in the best Mexican restaurant ever, Sagebrush Cantina, and got to know the food a little too well.  Nachos, enchiladas, tortilla soup, sopapilla, flan, queso, flautas....I am drooling just thinking about it.  The staff received a heavy discount on the food, which was prepared by a real Mexican staff (who didn't even speak English), so it made it very difficult not to indulge in everything.  The restaurant was very popular, so it was always busy, and there was always a wait which made the 10 hour shifts go by very quickly.  I eventually quit, and moved away to California, but I still have a soft spot in my heart for Sagebrush Cantina, and make a point to stop by at least once when I am in Michigan visiting my parents.

So, as you can probably gather, I love making Mexican food.  I decided to try out some vegetable enchiladas using potato, which I haven't tried before.  I think they turned out delicious, and with the potato they were very, very filling.  I had a little bit of filling left over, and my husband was happy to eat that up with tortilla chips! Throw everything in the skillet Wrap them up and top them with sauce

Top with a little sour cream or greek yogurt.....yum! 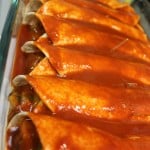